Lägg till i din kalender

Länk till avhandlingen i fulltext i DiVA.

Lithium-ion batteries have since their introduction on the commercial market in the early 1990s played an important role within the field of energy storage. In this thesis both titanium dioxide, TiO2, and lithium metal are investigated based on their properties as anodes for lithium-based battery technologies. TiO2 nanotubes with lengths between 4.5 and 40 µm were synthesized through a two-step anodization of titanium metal foil in a fluoride containing electrolyte. The formed nanotubes were investigated using scanning electron microscopy and electrochemically evaluated in pouch-cell batteries.

For the long nanotubes, especially the 40 µm long ones, the results indicate that the lithiation and delithiation processes are limited by the solid state diffusion of lithium ions within the electrode material for the employed cycling conditions. Studies of the TiO2 nanotubes at elevated temperatures, 80 °C, showed a good temperature stability both in a conventional organic electrolyte and in an ionic liquid based electrolyte. In full cells the ionic liquid electrolyte was needed to get a good performance mainly due to the LiFePO4 cathode. Despite a good general performance, the TiO2 nanotubes show capacity losses during high rate cycling. This effect was studied using galvanostatic cycling including open circuit periods and analyses of the cycled electrodes with inductive coupled plasma atomic emission spectroscopy. The results indicate the presence of a lithium trapping effect in the TiO2 electrodes caused by the lithium diffusion within the electrode material. The trapping effect was also seen in a comparative study involving TiO2 nanoparticles and nanotubes. The comparison also showed that the electrochemical performance depended on the electrode design.

Enabling of 2D lithium growth and avoiding lithium dendrite formation are of great importance for both battery research and practical applications. In this thesis an approach based on formation of a large amount of equally sized lithium nuclei on the surface in combination with a diffusion controlled deposition is described. To achieve this an electrolyte with a low lithium ion concentration, where the migrations is taken care of by a supporting salt, was used in combination with an initial potentiostatic pulse. This approach was found to yield a homogeneous coverage of lithium nuclei and dendrite-free deposition. 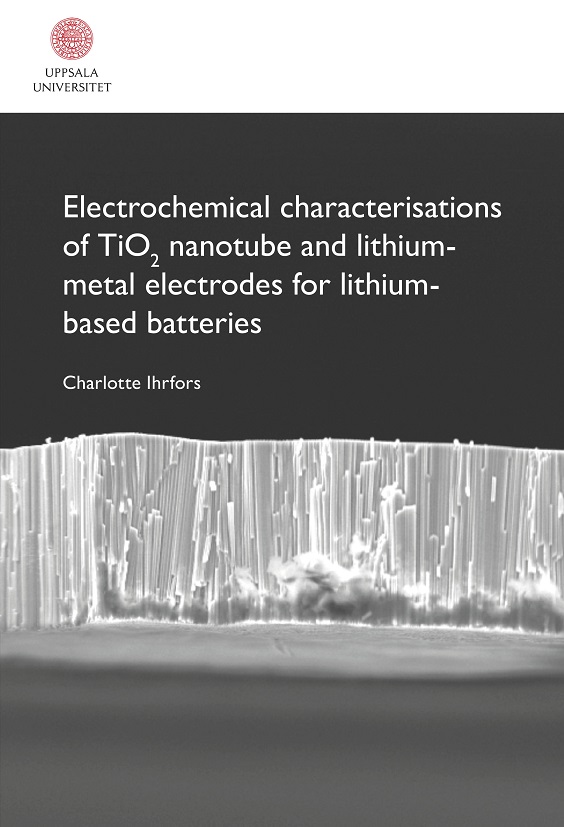