Honorary doctorate lectures at the Faculties of Medicine and Pharmacy

Welcome to the 2023 honorary doctorate lectures at the Faculties of Medicine and Pharmacy!

Michel Georges is Professor of Genetics at the University of Liège in Belgium and director of GIGA-R, a centre of excellence for medical and veterinary research. He has made a number of breakthroughs in the field of genetics, often using domestic animals as models for mapping how genetic mutations in cattle, dogs, sheep and pigs affect important physiological characteristics, such as muscle mass and milk composition, as well as several monogenic diseases.

Cecilie Svanes: “The Early Life and Preconception Origins of Adult Asthma and COPD”

Cecilie Svanes is Professor at the Centre for International Health at the Department of Global Public Health and Primary Care, University of Bergen. Svanes’ research area is asthma, allergies and chronic obstructive pulmonary disease (COPD). She specialises in the impact of childhood environments on the origins of respiratory health and disease.

Alexander Masters: “The Patient Doctor and the Doctoring Patient”

Alexander Masters is an author and freelance journalist based in the United Kingdom. His committed journalism has been crucial to establishing a unique clinical trial for patients with severe cancers at Uppsala University Hospital.

Siew Chai: “The Enigma that is IRAP, Is it an Enzyme, a Receptor or a Trafficking Molecule?”

Siew Chai is an associate professor and researcher at the Biomedicine Discovery Institute at Monash University in Australia. She did groundbreaking work early in her career by identifying the macromolecular target for the endogenous cognition enhancer angiotensin IV.

During the COVID-19 pandemic, Richard Bergström was Sweden’s national vaccine coordinator. He lives in Switzerland. Occupying an important and highly visible role during the pandemic, he proved to be highly effective and clear in his communication. 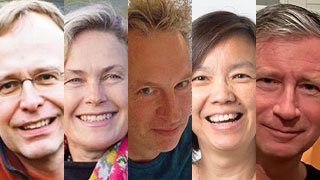